RobotTowerTR1200 is designed for packaging or palletizing applications. It has 4 degrees of freedom, which allows effective implementation of complex traffic.

The robot armallows you to mount any gripper, there is also the possibility of using a gripper exchanger, which enables quick conversion of the robot in manual or automatic mode.

The robot can move payloads up to 100 kg, with a maximum range of 1200 mm. In the mass to be  transferred, also take into account the weight of the gripper used in the application.

Thanks to the use of gears with an opening in thei ndividual axes of rotation, all the conductors are routed inside the structure. The vertical robot can be additionally secured using a bellows cover before access to the contamination.

The robot's structure can be adapted to its foundation on the drive system, based on linear guides and high-precision drive. Thanks that robot gain additional motion axis, longways it can shift around with payload (length of the transport unit can be adjusted).

The robot can be additionally equipped with a variety of sensors or a vision system that transmits information about the location or orientation of the object that has to be transported.

Robot control is placed in a separate control cabinet. The robot is programmed using the environment installed on a PC-class computer with the Windows system. To the robot controller via the RS485 port, you can connect the HMI panel and communicate withitin the MODBUS-RTU protocol. 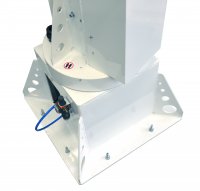