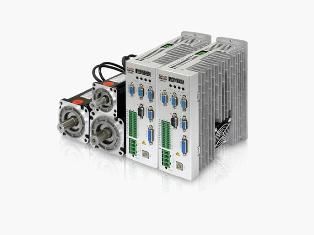 Servo controllers allow you to achieve the desired effect, for example, the right position, number of revolutions or speed. Kinco offers four series of drivers with wide possibilities and an attractive price. The basic CD series is designed to control three-phase AC servo motors.

The controllers communicate via the RS232 interface and can work in several modes: step / direction (in analogy to stepper motors), speed control, torque, position, travel to the desired home position. The servo start-up and deceleration times of this series are at 10ms. This allows you to set a very steep work ramp. The CD series is perfect for less advanced applications, for which the offered functions are sufficient, while maintaining a very attractive price.

The latest economic servo controllers from the FD series , in addition to the CD series, have been additionally equipped with RS485 Modbus RTU and CANopen communication interfaces, thanks to which they can communicate with the PLC or with the operator panel.

A new version of the controller is prepared for cooperation with engines equipped with an absolute encoder and the possibility to choose a driver with the EtherCAT interface. This protocol is based on the physical layer of an Ethernet network, which, thanks to the high data rate, a large range that allows the construction of remote and distributed nodes is one of the most popular communication standards in industry. The greater number of communication interfaces to choose from, as well as the possibility of cooperation with a motor equipped with an absolute encoder significantly increases the amount of application for drives with this controller.

Similarly to controllers from other series, they can work in several modes: step / direction (in analogy to stepper motors), speed control, torque control, travel to a preset position.