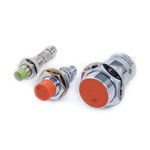 The use of proximity sensors is the most popular and affordable solution for contactless detection of an object. Most often, inductive sensors are selected, whose magnetic field detects metal objects when they are brought closer to the sensor face. This is usually the simplest detection technology for use in applications in which the metal object is located a small distance from the measuring tip.

We offer a wide range of proximity sensors from classic cylindrical sensors to rectangular sensors and accessories such as transmitters, junction boxes and connectors as well as wires.

The proximity sensors have:

Sensors are supplied in a housing with M8, M12, M18 or M30 thread with an operating zone from 1.5 mm to 15 mm.
They are made as normally open or normally closed with a 3-wire NPN OC or PNP OC transistor output for 12 ~ 24 VDC or 2-wire for 100 ~ 240 VAC.
The frequency of their work depending on the measuring range is between 20 Hz and 1.5 kHz.
The sensor has a detection indicator (red LED), protection against reverse polarity and increased voltage.
Their degree of protection is IP67 and is designed to work at -25 Â° C to +70 Â° C.

In addition to the cylindrical sensors, sensors are also available in the rectangular housing of the AS series , PS / PSN , PFI.

The PET transmitter is a proximity sensor that does not require an external power source and transmits signals through the magnetic coil of the coils.

The connection boxes and attachments from the PT series allow several sensors to be operated at the same time using a single power source. Wires for sensors are in the categories CID / CLD and Cxx4. 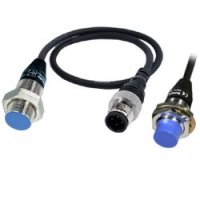 Inductive sensors with a larger range of PRD / PRDW / PRDCM

Square inductive sensors with a large AS range 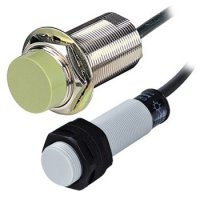