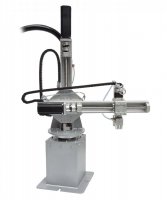 The robot arm allows you to mount any gripper, there is also the possibility of using a tool changer, which allows quick gripper replacement in manual or automatic mode.

The robot can carry loads with a total mass of up to 15 kg , with a maximum range of 500 mm (the standard range is 300 mm). In the mass to be transferred, take into account the weight of the gripper used in the application.

The proper assembly of the robot's wires allows you to achieve 360º movement around your own axis. The vertical axis of the robot can be additionally secured with a pleated cover against dirt.

The robot's construction can be adapted to its foundation on a running unit, based on linear guides and a high-precision slat bar drive. As a result, the robot gains additional movement, along which it can travel with the load, almost anywhere.

The robot can be additionally equipped with a variety of sensors or a vision system that transmits information on the location or orientation of the object to be transported.

Robot control is placed in a separate control cabinet Robot is programmed using the WBCprog environment installed on a PC computer with Windows system. To the robot controller, through the RS485 port, you can connect the HMI panel and communicate with it in the MODBUS-RTU protocol.