The development of the renewable energy market means that inclinometers commonly used in construction machinery, on ships or for bridge deflection control find a number of new applications such as control in parabolic solar panels. The technology that has increased the capabilities of these devices, facilitating their implementation is MEMS (Micro Electronic Systems). WObit offers the most modern angle sensors based on this technology.

Inclinometers are used for non-contact measurement of deviations in an absolute way. Accurate measurement of the horizontal or vertical inclination angle is extremely important in all applications where it is necessary to ensure safety in traffic control. Thanks to the contactless principle of measurement, there is no need to use mechanical connections to external elements and you can easily monitor the location of objects in space. For example, you can track the position of the sun and change the deviation and height of photovoltaic systems and solar panels, and thus increase energy production.

The currently most popular tilt sensors use silicon micromechanical elements (MEMS), performing the measurement on a capacitive basis. In the WObit offer there are inclinometers available for two German producers working on this technology.

The Gemac helix sensors are able to measure deviations from the horizontal axis in the angular range up to 360 °. The micromechanical silicon element is a type of differential capacitor. Depending on the location of the capacitor relative to the gravitational pull vector, the electrically suspended mass (internal electrode) influences the capacitor's change to the sensor's deflection. Small potential changes, when supplied with a precise reference voltage, result in changes in the voltage captured by the ASIC (Application Specific Integrated Circuit). This special type of integrated circuit dedicated to a specific task makes the Gemac heel sensors faster, they consume less energy and are also characterized by high reliability.

GEMAC inclinometers can perform measurements in one or two axes, and their angular range can be individually adapted to the application needs (up to ą 90 ° or ą 360 °). The devices are manufactured with various interfaces, including analogue voltage, current or digital output, in the RS232 or CANopen standard.

An example of a functional inclinometer for industrial applications is the single-axis IS1D00P20 with a range of ą 360 °, available for measuring two axes, then the available angle range is ą 90 °. This tilt sensor has a high resolution of 0.1 ° and an accuracy of 0.05 °. Despite the elastically suspended micromechanical silicon element, the inclinometer is characterized by high vibration resistance, which can be additionally regulated. This model is equipped with a CAN interface. The bandwidth of the link is from 10 kB to 1 MB.

Among the available functions, one can distinguish the option of angle selection, cyclical output and synchronous outputs as well as configurable switching frequency. The inclinometer is enclosed in a robust, UV-resistant and shock-proof compact plastic housing. The high degree of protection IP65 / 67 and a wide range of operating temperatures from -40 ° C to + 80 ° C allow easy implementation of the device in such applications as construction machines - eg multi-bucket excavators or agricultural machines - various types of sprayers, combines, etc.

The inclinometer allows first of all for precise control of machine working tips, and what is extremely important for ensuring safety. In addition, maintaining a constant angle allows you to increase efficiency and avoid failures caused by unwanted changes in deflection. The device can also be used to increase the efficiency of energy generation by solar panels by optimizing the collector position.

Inclinometers are characterized by a very compact design, so they can be easily used in many applications with limited installation space. Another factor simplifying assembly to existing machines are communication interfaces. As a standard, these devices are equipped with RS232 or CANopen.

Correct positioning and tilt protection plays a key role in many applications. As an example, the use of inclinometers can be given for the positioning of cranes and other loading machines. Tilt sensors also play an important role in the dynamically developing branch of renewable energy in Poland - wind farms. They are used there, among others to control the setting of wind turbines.

How to select the right infrared temperature sensor? The 6 most important tips

The article presents the most important factors that should be analyzed in order to get the right temperature sensor.

END_OF_DOCUMENT_TOKEN_TO_BE_REPLACED 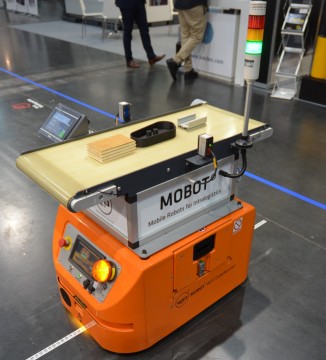 Part quality control during transport with a mobile robot

In this article, we will show you how, using automatic transport, you can use the travel time to perform additional tasks - in this case, part quality control.