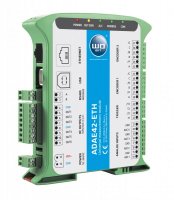 ADAE42-ETH is a multifunctional device dedicated to sensor cooperation, both with analogue output (voltage or current) as well as rotary or linear impulse converters with square wave output. An example of the use of such a device can be profile control, where apart from the need to measure the distance (laser sensors with an analogue output) information about the location of the scanning head is required.

The device supports up to four sensors with an analog output and up to two sensors with a quadrature output. In addition, the module makes it possible to perform mathematical operations carried out on the values from transducers (eg differential thickness measurement of a detail).

In addition, the ADAE42-ETH has six OC type transistor outputs with configurable switch-on and switch-off thresholds depending on the value of analog inputs, mathematical registers, position and encoder speed. After programming the appropriate thresholds, the device can be operated independently (without PC supervision).

The RS485 and ETHERNET interfaces, on the other hand, enable reading of measurements from multiple modules at the same time and transferring data to master devices (eg PLC controllers, HMI panels) following the MODBUS-RTU protocol (for RS485) or MODBUS-TCP (Ethernet).